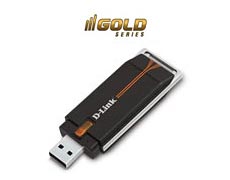 This adapter works for me on an IBM NetVista (Model 6274-14U) and an IBM Thinkpad A22m, both running Fedora Core 6. Linux did not initially recognize the adapter at boot time, but it was simple to download and build the ndiswrapper package from source, and then use the Windows drivers from the vendor's CD.

The NDISwrapper is not a device driver. It is instead a kernel module which allows Linux to use the vendors' Windows drivers. It doesn't always work, and you may find that it works better if you get Windows drivers from somewhere else.

Building ndiswrapper 1.51 required the "kernel-devel" package, which may or may not be installed by default. It is not enough to have the "kernel-headers" package installed.

I had to reboot at one point so that I was running the same kernel as the "kernel-devel" package. When I did not have "kernel-devel" installed, or it didn't match the kernel I was running, I got an error message when trying to build ndiswrapper which told me to try setting the KBUILD environment variable to point to my kernel configuration.

To build ndiswrapper I simply changed into the top source directory and said `make`. While everything built fine, I got the warning

*** WARNING: This kernel seems to use 4K stack size option (CONFIG_4KSTACKS); many Windows drivers will not work with this option enabled. Disable CONFIG_4KSTACKS option, recompile and install kernel

I did not have to do this.

Once I had ndiswrapper installed I used the vendor's driver CD to install the Windows drivers. For this you need the "inf" file and the "sys" file. I found these on the CD at /cdrom/setup/Drivers/Drivers as NETA5AGU.inf and A5AGU.sys. Then I simply said

To verify that the driver is installed:

Then to make use of the driver I said:

I could then configure the interface like any other wifi interface.

Saying `lsusb` shows the card as